Monkeys of A Monkey's Tale 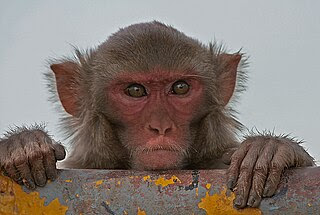 Rhesus Macaque (Macaca mulatta) commonly known in Hindi as Lal Mukh or Red Face. This little guy and his friends are a major source of trouble in India right now, primarily due to their ability to adapt to the adverse environmental conditions created by their human kin. A Monkey's Tale features lal mukh in a number of typical situations such as stealing sun glasses and returning them in exchange for treats. They really love tomatoes.
(Photo:Rhesus Macaque Macaca mulatta in Kinnerasani Wildlife Sanctuary, Andhra Pradesh, India.
J.M.Garg,) The Gray Langur or Hanuman's Langur (Semnopithecus entellus, although  there's lots of taxonomical talk about them), known in Hindi as Kala Mukh, have been enlisted as Macaque police in some cities. They are larger than their red cousins and have a somewhat different lifestyle. A Monkey's Tale features the story of a coup d'etat in a langur troop.
(Photo:Family of Grey Langeurs near Theppakadu Log House, Mudumalai National Park, Marcus334) 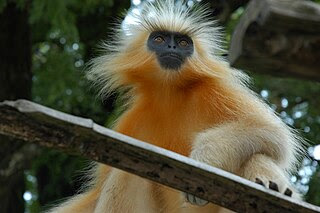 Gee's Golden Langur (Trachypithecus geei)  is an endangered species discovered by E.P. Gee in the 1950's and sacred to the hill tribes in Assam. The unknown species of golden monkey in Rajasthan  featured in the book is NOT a Gee's Golden Langur, nor is it the rare genetic variation that occurs occasionally in Rhesus macaques. No, the Golden Monkey of Rajasthan is yet to be discovered.
(Photo: Golden Langur CC-BY-SA-2.5.Doniv79) 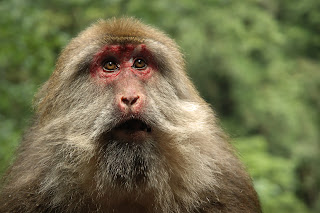 The Tibetan Macaque is the largest of the Macaques. He is sometimes found in north-east India, butt resides primarily in China and Tibet. Tibetan macaques are known for a peculiar peace making behavior known as "infant bridging."  A male Tibetan appears in our story to explain the practice and philosophize that one should, "Make love not war." (Photo: Tibetan Macaque on Mount Emei, China, 10 June 2006, Wikipedia, Plastic TV) 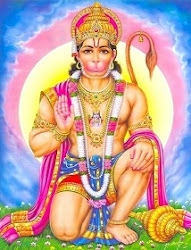 Who are you, Hanuman?
That depends. I'm multifaceted and multi-fascinating. Some call me Son of the Wind. I am the Great Courageous, known as Servant of Divine Awareness, but you can call me H.

What do you look like?
Being too modest to respond, I defer to my amanuensis.
Lord Hanuman is a handsome primate with sinuous limbs and shining golden fur. His bejeweled garments ripple as he speaks. His size changes at a whim and his tail is ever dynamic.

What is an amanuensis?
My recorder who conveniently follows me everywhere I go and, serving as my secretary, screens my correspondence. She is a little daft, but she's the best I have. Did you record that?

Patricia Morningstar
I am an event